The Graco Uno2Duo stroller is the newest convertible stroller available as of January 2018. The main benefit of the Uno2Duo over the other leading choices is that it provides all the same important features for a lower price. 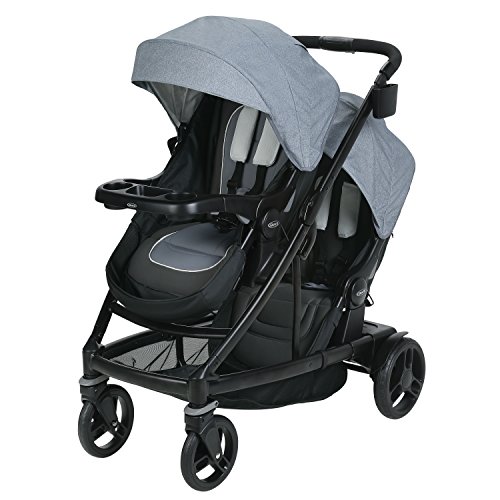 Like all single to double strollers, the advantage is that you can buy one stroller instead of buying both a single and a double. From that perspective, it saves both money and space.

The downside is that convertibles, like doubles, are heavy so there is some sacrifice in maneuverability. If you buy a convertible and then don’t have a second child or have one later than you planned, you may end up pushing around additional weight for a couple of years for nothing. In this article, we’ve reviewed all the tandem double strollers so you can make a more informed choice.

Versatility – Lots of Ways to Ride

Not surprisingly, one of the coolest features is all the different ways you can position baby. Even in single stroller mode alone, the Uno2Duo has 10 different setups.

Take a look at the image below. One child can ride in the stroller forward-facing or rear-facing. They can do it laying down in the built-in bassinet. They can also sit in the standard stroller seat which is included in the base model. Or if you have an infant car seat, like the Graco Snugride Clickconnect 35 or Snugride Snuglock 35 Elite , they can sit in the car seat, also in either direction. The regular stroller seat folds down pretty easily into a bassinet. You have to reach underneath, but there is a latch that unsnaps and the seat then lays flat. This is nice when baby falls asleep and you know she’ll be more comfortable when you change to the reclining position. 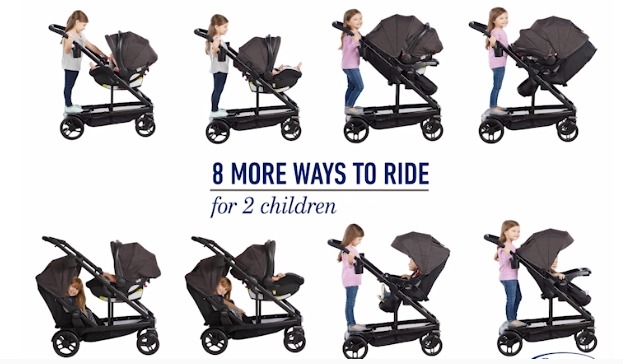 As you can see above, when you convert the stroller to double mode, there are 8 additional configurations.

The stroller converts by pulling out the handles which extend 5 inches, and pulling back on the frame which also extends 5 inches. You can actually extend it even in single stroller mode and make extra storage room underneath.

Toddlers can stand on the frame where there is a little platform and hang on to the handles. The second child can also sit in the back seat which is positioned over the rear wheels and facing forward. One downside to the second seat is that the child in the back can’t really see very well, but this is common for in-line double strollers.

Harness is 3 Point or 5 Point

The safety harness has both a 3-point and 5-point mode and the 3-point version makes it convenient for buckling in bigger kids and provides a better fit than one-size fits all.

This stroller has several nice extras that we have come to expect in high-end baby gear, but they are still super nice to have. It comes with a tray with cupholders for baby and a cupholder and phone holder for parents. It has a big storage area underneath and has a one-hand fold mechanism, which is also a life-saver.

Another thing I really like is the way it looks. The charcoal colors in gray/black and brown shades are classy.

As a Travel System

If you purchase the Graco Uno2Duo as a full-fledged travel system, you get the Snugride / Snuglock 35 Infant car seat and base. The base stays in your car so you can snap the car seat in and out easily. The Snugride also has Click Connect so it clicks into and out of the stroller equally easily. 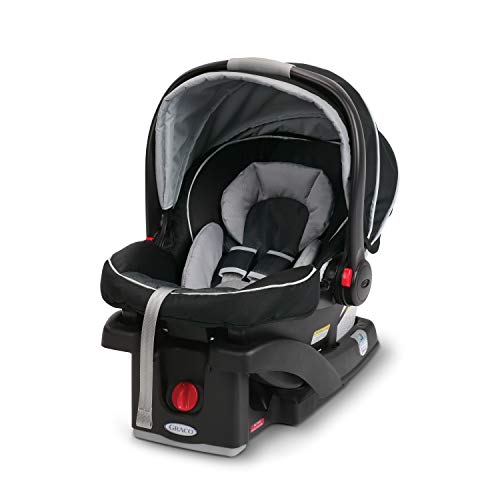 Because this is an infant car seat, it is rear-facing only (in the car) and holds babies from 4 lbs to 34 lbs. 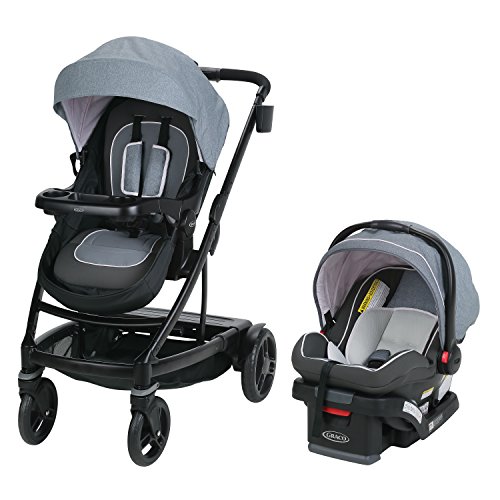 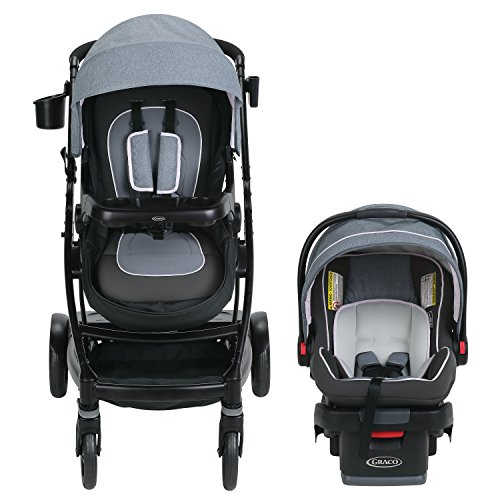 The Graco Uno2Duo is heavy. It is 40 lbs. in double mode. That’s a lot of weight to push around. It accommodates two kids at up to 50 lbs. each, so it has to be big strong enough to support that weight. But if you maxed it out, that would be 100 lbs worth of kids and 40 lbs of stroller, which is a whopping 140 lbs. That’s not going to happen, but you get the point.

The Britax B-Ready convertible, by comparison is just under 33 lbs. in double mode. The Baby Jogger City Select is 37 lbs. in double mode. As far as size goes the dimensions are 45.50 x 38.63 x 25.50 (in inches) which is very slightly narrower and shorter than the Britax. 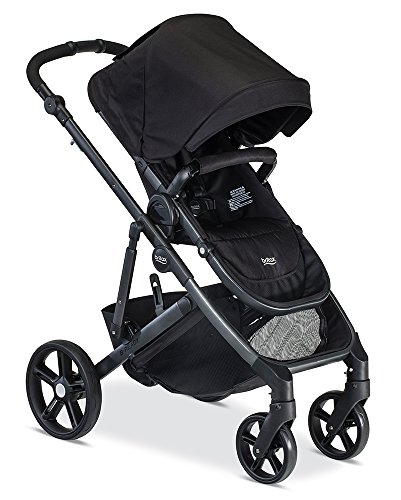 The Graco Uno2Duo has about the same features as the 2017 B-Ready at a significantly better price. The newest B-Ready is not well reviewed primarily because the front wheels sometimes freeze making it difficult to steer. The inconsistency in performance of the stroller implies there are quality control problems.

To be fair, the Uno2Duo is too new to know how it will match up quality wise.

As I mentioned above the Uno2Duo is heavier than the B-Ready and a slight bit smaller. The extra weight is probably worth putting up with for the difference in price. Although I hate to say that because weight is definitely an enemy when it comes to strollers. A benefit of the B-Ready is that it stands upright when folded. It can also be folded with both seats installed, which is NOT true of the Uno2Duo. 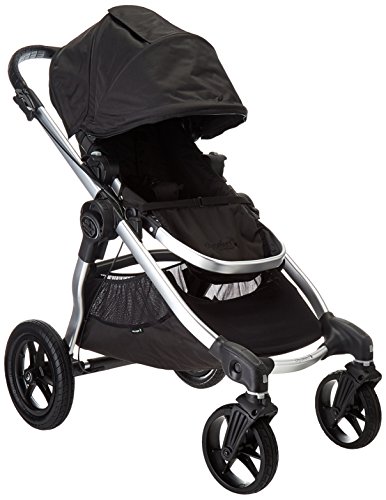 The Baby Jogger City Select is currently priced higher than the Uno2Duo and just over the B-Ready. But it is a super nice stroller. It is compatible with most of the leading infant car seats, if you already have another brand (although you’ll need to check your brand just to be sure).

One weird thing about the City Select is that the second seat sits on top of the front wheels. This makes it easy for your kids to look at each other, but doesn’t help with the steering. Because the weight is in the front and over the wheel, it makes it harder to steer and lift up the front of the stroller when you need to jump a curb.

The Baby Jogger City Select convertible is very well reviewed. While not quite to be considered a luxury stroller like the UPPAbaby Vista, it has many of the same features.

If you are seriously considering the Uno2Duo, and you have every reason to, the UPPAbaby Vista may not fit your budget. The Vista is loved by its owners. The stroller is a joy to push because it steers so well. It folds smoothly and more compactly than the other strollers I mentioned above. It also comes with a fabulous bassinet which can be used separately from the stroller.

The Vista has extras that the Uno2Duo doesn’t have like a very nice canopy and 4-wheel suspension for a really smooth ride. It also comes with a bug and rain shield for the bassinet and stroller.

While I’m talking about alternatives to the Uno2Duo I have to mention the Bugaboo Cameleon 3, mainly because it was one of the very first strollers that converted from single to double mode.  It is also a high priced stroller with nice features and a pretty bassinet, but isn’t nearly as popular as either the City Select or Vista. 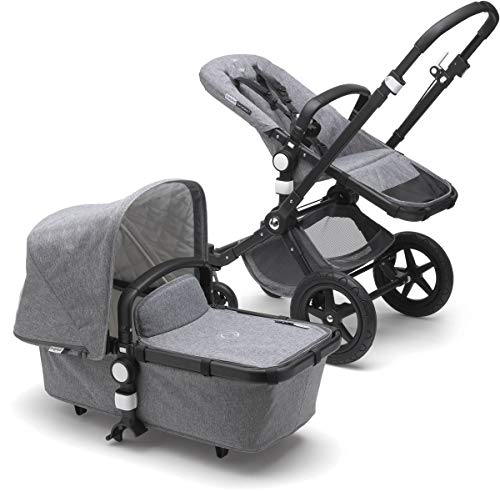 The Graco Uno2Duo isn’t perfect, but I really like it and think it is a solid choice for most people who don’t need the extra features of the City Select and Vista strollers. The drawbacks of the Uno2Duo are that it is a bit heavy and although it folds easily, it isn’t overly compact after it is folded.

The good news is it is extremely flexible, it has all the most important features in a convertible double stroller and it has a reasonable price especially if you go all in and get the travel system.