The Fisher-Price Soothing Motions Bassinet is a stationary bassinet designed to problem solve many of the common “sleeping roadblocks” for newborns.  Sitting at a middle-of-the-market price point, this bassinet has many positive features to offer.

After extensive research into the safety and user-friendliness, here is everything you need to know in order to make an educated decision about whether the Fisher-Price Soothing Motions Bassinet is right for you. 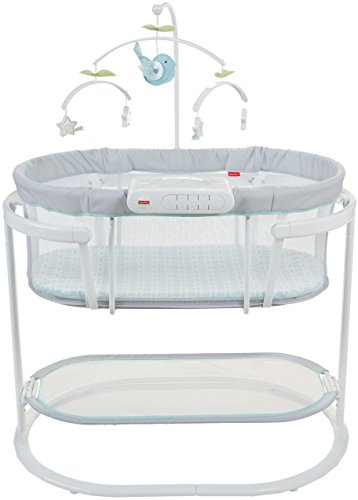 According to research done by the doctors and the Consumer Product Safety Commission (CPSC), the main safety issues to look for in a bassinet are breathable walls, a flat and mostly firm sleeping surface, no protruding hardware pieces, and a wide base to avoid tipping.  The Soothing Motions Bassinet meets all these criteria.

The walls are made of breathable mesh and the mattress fits snugly into place, leaving no room for the baby to become wedged between the bassinet walls and the mattress.  The mattress pad is firm enough to avoid suffocation hazards but soft enough for infants to sleep comfortably.  Many users compared it to the softness of a pack n’ play mattress pad.

Bassinets are also designed for infants and not rated for the safety of children that are capable of rolling over.  The Soothing Motions Bassinet is rated to hold an infant up to 40 pounds.  As many other infant products are only rated up to 30 pounds, the extra weight limit is definitely a bonus as many babies gain weight quickly in those first few months. 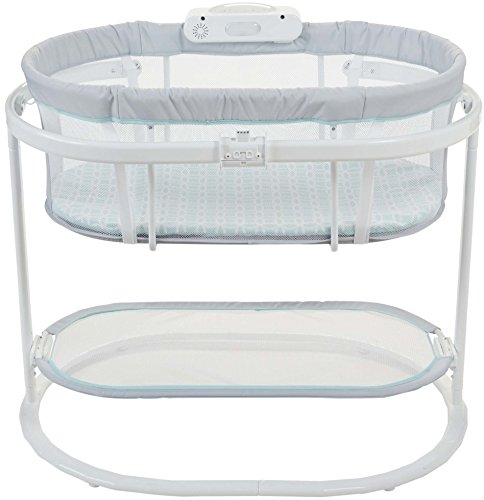 The rocking motion is manual as opposed to battery operated.  In other words, you have to sway the bassinet by hand or your baby will cause it to sway naturally as he/she wiggles.  This can be a very soothing motion for newborns still used to the constant movement of the womb.  In a sense, active little ones can “rock themselves” to sleep.

This type of motion doesn’t sit well with every infant, however, and some movements, such as startling in their sleep, have the potential to become exaggerated.  This depends predominantly on the infant and most little ones have the ability to adapt quickly.  Some users compensated for this extra movement by securing one or both ends of the bassinet with tape or Velcro to keep it from swaying from the baby’s movements.

Newer models of the Fisher-Price bassinets also offer a “lock-out” motion to minimize movement if desired. 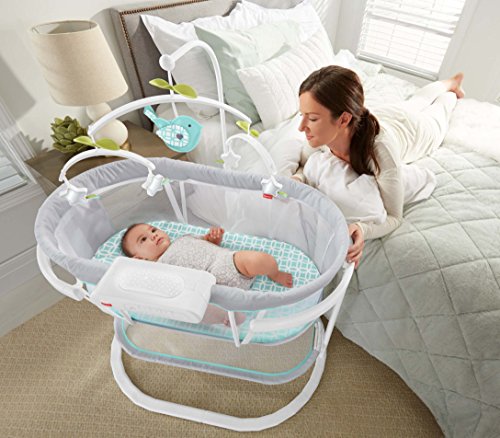 Attached to one side of the bassinet is a removable attachment that houses the bassinet’s light, sound, and vibration options.

The vibration and noise settings run on a 30 minute timer and require 3 C batteries (not included).  Sounds have volume control and parents can choose between nature sounds and soothing lullabies.  The vibration feature actually comes from the same music attachment.  Its placement on the side of the basket, as opposed to underneath, gives an extra-gentle vibration.  Many users complained about the timer function and wished that the vibration feature would run until a parent turned it off.  In short, they’d rather sleep and buy lots of batteries than have their infant wake up when the vibration stopped.  This could be an option though research has shown that if left on continuously, it can be harder for a baby to transition away from this when they need to start sleeping in a crib or larger bed.

The attachment also features a variety of light options including soft-glow night light, a midnight light, and soothing projection.  The light features do not run on a timer making it easy to check on your baby throughout the night.  Perhaps the best feature is the midnight light which temporarily activates a soft orange glow so mom/dad can check on the baby without disturbing his/her sleep.  The soothing projections are an added bonus and a real lifesaver during midnight feedings if the baby doesn’t want to go back to sleep but mom does.  Lights can be amazingly entertaining in those first few months.

The only downside to this design is that if you want the lights a little further from your bed (i.e. you detach them and place them on a table or in a corner), you also lose the ability to use the vibration feature.  There is no way to have the calming vibrations without attaching the plastic attachment.  So, if the lights/vibration bother the parents but help the baby, the whole bassinet needs to pushed away from the bed (only an issue if you choose it to be). 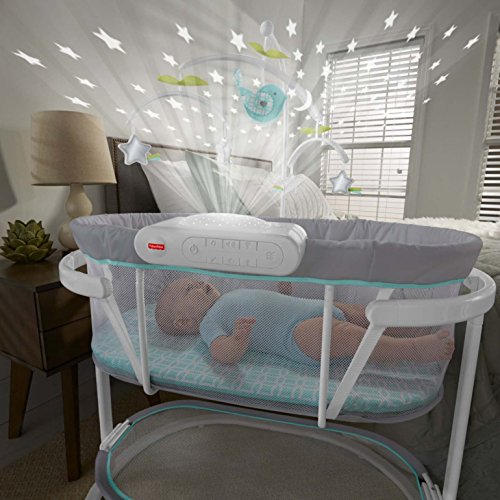 One benefit of the Soothing Motions bassinet is how simple it is to put together.  Once assembled, the bassinet weighs in at 20 pounds.  As it does not have any wheels, this bassinet is not designed to move around easily.  While it doesn’t take up as much space as other bassinets in its class, you should not plan on packing it up and transporting it regularly.  One of these traveling bassinets would be a better option for that!

The Soothing Motions Bassinet is available in 3 different gender-neutral color schemes.  Each is designed with a slightly different mobile that coordinates with the color pattern on the mattress cover.  While each design is priced differently, there is only a small variation in price from design to design.  The mobiles can turn at three different points making for great infant entertainment while also sitting at a safe distance out of reach to avoid a choking hazard.

For moms that get the profound “pleasure” of dealing with spit-up, the mattress itself is waterproof and can easily be wiped clean.  The patterned mattress cover is not waterproof but is removable and washable.  This is a must-have for any baby item to stand the test of time.

This Fisher-Price bassinet also comes equipped with a small shelf under the sleeping area for extra storage.  Advertised to hold an extra blanket or perhaps diaper changing supplies, the design of this shelf is not ideal for holding much weight.  The shelf is only secured in the middle and therefore tips slightly to each side if it is unbalanced.  I would not recommend counting on this shelf to hold much more than a few diapers and some wipes. 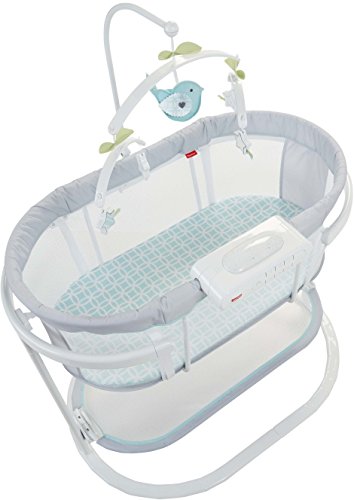 The gender-neutral prints add to the adorable factor as well.

If I were a new mom, I would be excited to have all the options of sleep soothing available to me from the beginning so I could learn exactly what my baby needed to get as much sleep as possible.

Things I didn’t Love About the Soothing Motions Bassinet

While this bassinet only sits a few feet off the ground, it is not equipped with adjustable height or with sidewalls that can be lowered for easy access to the baby.  Many bassinets are equipped with a shorter sidewall so that parents can soothe their little ones while still lying down in bed (such as a bedside or cosleeper bassinet).

The bassinet also is not equipped with wheels making it fairly difficult to maneuver if needed (such as sliding it over to get in/out of bed).

The shelf attached to the base of the Fisher-Price Soothing Motions Bassinet is not very strong.  Having quick access to specific items can be a game-changer for moms and this shelf is not ideal for storage as it is made of mesh and tilts from side to side.  While it can successfully hold a few small items, the design of this shelf could definitely be improved.

Overall, I would recommend the Fisher-Price Soothing Motions Bassinet as a great tool for new moms.  Fisher-Price has been a trusted household brand since 1930 and their attention to detail and safety is shown in their design of this bassinet.  This is evidenced by not only the number of these bassinets sold but also by the fact that 75% of users across many sites gave it a 5-star rating.

Where other bassinets offer one or maybe two of the standard soothing options, the Soothing Motions bassinet is virtually an all-in-one package deal with lights, sounds, vibrations, and a rocking motion.  It meets all the recommended safety features and maintains a sleek, fairly lightweight design.  When compared to similar bassinets, the Soothing Motions Bassinet is also more accessible to those on a budget.

In short, Fisher-Price Soothing Motions Bassinet would be an excellent choice for any family.

Mary is a wife to her husband Jake and a mother of two boys. She loves music and reading and anything that involves being outside. Nothing is good for the soul like sunshine! As a world traveler, Mary has also had the opportunity to see moms around the world in action. Being a mom is a privilege and it is Mary's passion to help moms everywhere find the very best for their families.