The Clek Olli and the Clek Ozzi booster seats offer more similarities than they do differences between them, both manufactured by a company priding itself on innovation and safety in all that they do. A comparison of the two is below, along with a background of Clek Inc, and an explanation of the importance of booster seats for children and the data that has informed Clek’s designs.

Why Use a Booster?

Not long before I ventured into parenthood, I can remember riding in the car of a colleague of mine and noticing a booster seat in the back.  Upon asking and learning that it was for his son, I quizzically replied:  Isn’t he eight years old?  A booster seat for a child that age made no sense to me.  When I was an eight year old, sitting in a booster seat would have no doubt invited some strange looks and the road of social ostracism.

Booster seats were those red plastic mini-chairs’ for toddlers to sit in at the family style restaurants that we frequented on the weekends. Of course, when I was a baby, car seats were only beginning to enter the market, and I can guarantee you that the ones in existence back then would not have held my son on any car ride ever I would not have put him in any of them. Safety standards for children in cars today have not just improved; they have been more or less re-written.

Though I was baffled upon seeing the booster in my colleague’s car that day, and though a booster would not have crossed the mind of any parent who was raising an eight-year-old child of my generation, my son will be riding in one for many years once he has graduated from his car seat. According to the National Highway Safety Traffic Administration, children between the ages of 4 – 8 who sit in booster seats are 59% less likely to suffer an injury from a car accident than children who use only seat belts alone.

With the most recent research showing that automobile crashes are the leading cause of death for children in North America up to the age of 14, the more prevalent question should be Why would I NOT use a booster? This is paralleled by the fact that the majority of states in the US today require the use of booster seats by law, generally stipulated by age and/or weight of the child.

When choosing a car seat or booster for our little ones, safety is the forefront concern of all of us. Every manufacturer will claim to be the best, and it is up to us to look beyond the writing on the box and into who’ that manufacturer is. In my own experience of researching for my son’s car seats, I felt immediately more at ease (if that feeling is truly possible for a young mother) if I read that a manufacturer of a car seat carried previous expertise from years in the automotive industry.

I wanted to know that the engineer who designed my son’s car seat knew the ins and outs of vehicle velocity, inertia, material safety, differences arising from various angles of impact, etc. Every single possibility that I would not be able to think of myself only a seasoned veteran of automotive design would know what to look for.

Clek: Who They Are

Clek falls under my list of manufacturers to consider due to the above. The company originated in the early 2000’s as an in-office project of the CEO of Magna International, the largest automobile parts manufacturer in North America.  Following a report partly funded by Magna that showed only 20% of children were using booster seats (harkening back to my own recollection above, wherein the percentage would have been even lower), the team at Magna replied to feedback from the polled children stating that booster seats were uncomfortable and looked like baby seats. Their reply came in the form of booster seat designs for comfort and aesthetics, while maintaining the focal point of elemental safety.

Made in the USA: For those parents among you who prefer to purchase products with the Made in America’ seal, it should also be noted that Clek boosters and car seats are manufactured entirely in North America. The company takes pride in supporting North American businesses and workers, as well as remaining close to the hands-on process of creating and manufacturing each product that is sent out.  It further confirms on its website that most’ suppliers are North American based as well, though without additional detail offered on the extent of the term most’.

Clek as a company itself caught my attention for the reasons mentioned, but now let’s have a look at the two booster seats that the company offers:  the Olli and the Ozzi. As a matter of comparison, the Olli and the Ozzi do not differ in many ways outside of price, accessories, and a few minor aesthetics.  The Ozzi can more or less be viewed as a lower priced version of the Olli, without all of the bells and whistles. The question of safety, however, has not been compromised. This system locks the Olli booster seat into place quickly and efficiently, confirming that the booster seat has been latched properly by an audible click.  More specifically, the Clek website confidently states that the LATCH connectors will have the seat securely anchored in its place in 10 seconds or less. (As someone who took over an hour to figure out how to install my son’s first car seat, this is a welcomed concept to me.)

LATCH refers to the Lower Anchors and Tethers for Children’, which are found between the crease of the seat back and seat cushion in all vehicles manufactured in 2003 and thereafter. Clek is clear in stating that if a vehicle does not have the LATCH anchorage system, the Olli can still be safely used unlatched.

The Olli is built with an additional layer of padding for extra comfort, preventing the numb-bum’ sensation described by Clek as that feeling of legs falling asleep after having sat on a hard surface for too long.  The Comfort-cube is comprised of a metal substructure for stability and safety; an expanded polypropylene base with an energy-absorbing capacity to reduce impact of bumps in the road; and and a molded polyurethane foam pad built to remain soft for several years.

Clek’s Crypton Super Fabrics are free of bromine and chlorine-based flame retardants, while still meeting all Federally required automotive safety standards. They provide moisture, stain, and bacteria resistance, and are easy to clean.

Just as the Olli is designed for LATCH anchorage within 10 seconds, it is equally designed with a Quick Release System for easy and fast removal.

Clekjackets are kid-friendly seat covers with fun designs that can be switched as often as your child desires.  The Olli is Clekjacket compatible.

The Olli also comes equipped with padded armrests, a drink holder, and a strap for easy no-hands carrying from one vehicle to another. 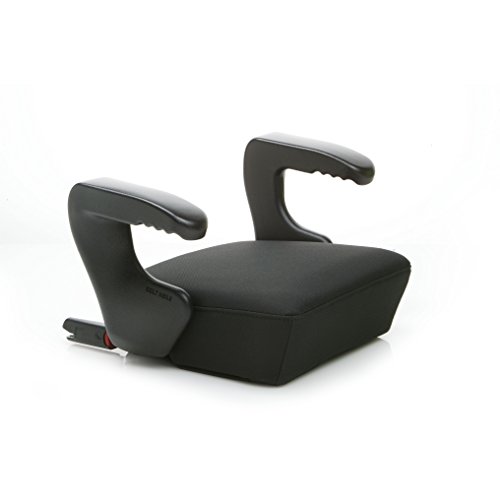 Differences Between the Clek Ozzi and Olli

So how is the Ozzi different from the Olli?  As stated above, in many ways, it is much more alike than different. A few distinctions remain, however, and among them is the price. The Olli out-prices the Ozzi by anywhere from 20 to 50%. Click to read why these price differences kept the Olli and Ozzi off our overall best booster seat list.

Additionally, the Ozzi is not award-winning, and it is not made of the Crypton Super Fabrics. It also does not have the padded armrests, the drink holder, or the strap for carrying. Though the Ozzi does’ have the LATCH System, it does not have the same Quick Release System as the Olli.  It does have the Comfort-cube, but is not Clekjacket compatible; the only color that the Ozzi is available in is black.

I feel confident in trusting that Clek will not put any product on the market that is anything less than entirely safe for our children, and for that reason, I would be comfortable with either booster seat in this instance. Again, safety being at the forefront of my mind, I am more concerned with having the LATCH system than I am with the Quick Release, the strap and drink holder, or the Clekjacket aesthetics. Parallel to safety, I am also more concerned with my son’s comfort level on those long drives than I am about the color of the seat he is sitting on, and both boosters have the Comfort-cube.

With that noted, I personally place a high value on the GREENGUARD concept of the Crypton Super Fabrics that are free of dangerous chemicals while still maintaining flame retardant safety. For that reason alone, I would spend the additional money on the award-winning Olli over the Ozzi.

Danica is a theater director and teacher, and a proud mommy to a precious baby boy who amazes her every day.