Is the top-of-the line Advocate really worth the extra money over the Boulevard?

I’ve said a few times that Britax makes some of, if not the, safest car seats on the market. They are designed from the base up to protect your little one in comfort and style. The Boulevard ClickTight Convertible Car Seat and the Advocate ClickTight Convertible Car Seat are no different. Both of these seats are at the top end of Britax’s convertible car seat lineup. With superb safety features, easy harness tightening and adjustment, and noteworthy comfort features, these two car seats are nearly the same exact thing. However, I think that the Advocate is worth the extra money in this case, and it wins my pick as the better car seat. 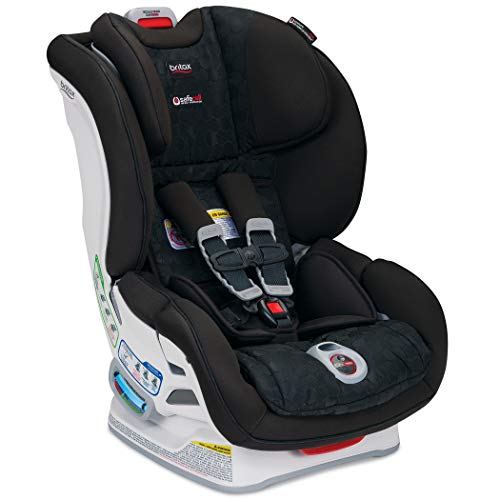 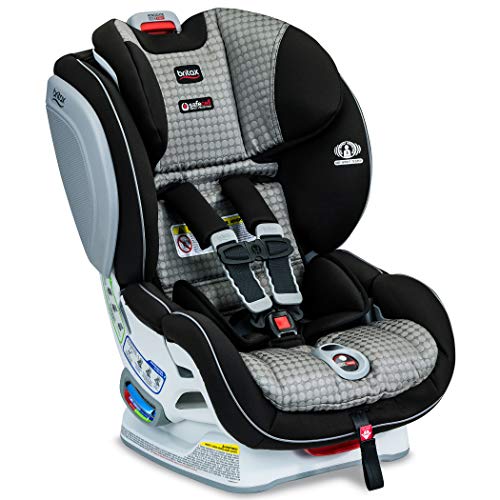 Let’s take a look at what features the car seats have in common, since it’s pretty much all of them. I always start with safety when reviewing car seats, because that’s the point, isn’t it? I can’t rave enough about the amazing safety features found in both the Boulevard and the Advocate.

ClickTight for the Win!

Britax’s ClickTight technology is the biggest safety feature that wins me over. We all know that I am a big latch system proponent, but I have to say, the ClickTight technology might almost be better. So what is it? It’s a way to secure the convertible car seat to the car using the car’s own seat belt. There’s a hidden ClickTight compartment under the seat of the car seat. You just open that compartment, thread the car seat belt through either the rear facing or forward facing belt path and buckle it, and click the compartment closed. It’s actually easier than latch systems, and you don’t have as many restrictions. 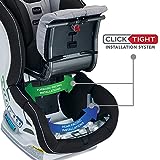 If you are wondering if the seat’s secure with ClickTight, let me tell you right now that it certainly is! I have used a few different types of convertible car seats between my own kids, my relatives, and my friends. They’ve all used latch systems, and even when tightened correctly, still had a tendency to wobble when in forward facing mode. Not these Britax seats. They won’t move even a half an inch after they’re installed. No second guessing, no using latch AND seatbelt to achieve security and peace of mind. It’s truly amazing.

Safe to the Core

Some car seat manufacturers might add some foam padding here or an extra bolt there to make a seat safe. But Britax has designed their seats to be safe from the very foundations. Here’s the other safety features that make these seats the best (and worth every penny!): 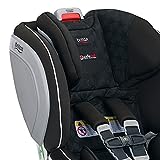 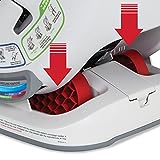 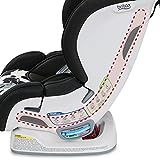 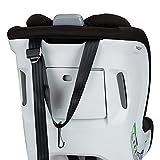 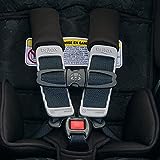 Geared for Growing Up

Your child will truly be able to get at least a few years of use from either of these car seats. And growing the car seat is as simple as possible and makes for a happy ride for both mom and child.

This term gets confusing in the car seat world. Since there are so many types of car seat, you might be wondering what exactly the Boulevard and the Advocate convert into. The answer: they go from a rear facing car seat to a forward facing car seat. That’s it. No boosters here. The weight limit for the rear facing mode for both seats is 5 to 40 pounds, and for the forward facing mode it’s 20 to 65 pounds. As for height, they can use the seat until they reach 49 inches. So while you can’t switch it into a booster, you’ll still be able to use this seat for many years. My 4 year old son still barely fits the height and weight limits for the forward facing mode, so there’s at least four years of use for us. 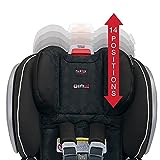 Taking apart my son’s infant car seat to rethread the straps was one of my most dreaded chores. I only had to do it every few months, but it was such a pain to remove the cover and straps and put them in their new home. The Britax Boulevard and Advocate seats have saved me from this pain. To adjust the straps, you just pull on the lever on the top of the car seat and move the headrest and straps to one of 14 different positions. Easy peasy! I will say that I have had to adjust the straps more often in the Britax convertible car seats because they seem to run on the smaller/shorter side.

Along the same lines is the adjustment of the bottom buckle for the safety harness. It was never fun to adjust either. Both of these car seats have 2 different locations for the bottom buckle to help keep growing kids comfy. You do have to take out the entire buckle and belly pad to rethread it, but it’s pretty easy to do. Again, be prepared to adjust it sooner than you think, since the bottom buckle strap isn’t very big.

We’ve gone over the two points that matter most when picking a car seat: safety and years of use. But what about all the other important features that matter on a daily use basis? The Boulevard and Advocate won’t disappoint in the comfort and ease of use categories.

This harness system is so lovely for two distinct reasons. The first is that tightening it is so easy. The strap for tightening the harness is located on bottom of the seat so that it’s easy to get to. Instead of pulling on it until you think it might sort of be tight enough and then giving up, you get some help from the car seat. The strap tightening mechanism will give an audible click when the straps are within the right tightness range. This â€œClick and Safe Snug Harness Indicatorâ€ helps mommy to tighten the straps safely and correctly and helps the kid be comfy since the straps won’t be too loose or too tight.

The second reason I love the harness system? The easy buckle system that keeps straps out of the way. There’s a little spot on each side of the car seat where you can place the harness straps when getting your kiddo in and out. This makes life so much easier when they get older and bigger and digging out straps that they’re sitting on makes life frustrating. It takes a few times to get used to remembering to place the straps there when you unbuckle the child, but it’s so worth it when you go to buckle them back in.

I do have two small complaints with the harness system that I think are worthy of voicing. I think that the straps run on the small/short side, like I mentioned earlier. Since my son is a big boy, I have had to loosen the straps more frequently, and I think he’ll outgrow them before he outgrows the seat sizing guidelines. Also, the extra padding on the straps do make them a bit harder to buckle. We’re talking about shoulder pads, chest pads, and a belly pad to contend with when buckling. I like the safety aspect, but they do get annoying. 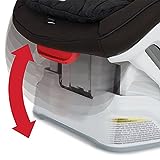 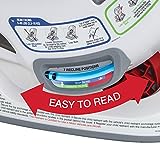 You can recline either of these seats into seven different positions. This is a must for a rear facing car seat! You can’t have a newborn sitting up straight! But you also don’t want an older toddler staring at the ceiling all day. With this seat, you can easily adjust the recline to where you need it. And as an added bonus, there’s an amazing level indicator on the side of the car seat that tells you exactly where the car seat should be angled, depending on the mode it’s being used in. Very user friendly feature.

Finally, I want to say how much I love the padding in these seats. Since they’re at the top end of Britax’s convertible car seat lineup, they have some padding that really makes it comfy for kids to sit in. Also, the fabrics are cute and high quality. But the best part for me is the machine washable cover. You don’t even have to take the car seat out of the car to remove the cover! Britax really had parents in mind with that design.

So How are the Boulevard and Advocate Different?

We’ve covered all the features that these seats share. So what’s the difference? There are 3 points that set these car seats apart:

Color options for the Boulevard Color options for the Advocate Ease of Use Ratings

Car seats sold in the United States are safe. They meet or exceed federal safety standards. The National Highway Traffic Safety Administration (NHTSA) rates each car seat on Ease of Use because injury is more likely to be caused by improper installation and usage than by the seats themselves.

After reading about all the specs, like the ultimate in car seat safety, the ease of converting, the great harness system and recline, and the fantastic, washable fabric of both the Britax Boulevard ClickTight Convertible Car Seat and the Britax Advocate ClickTight Convertible Car Seat, it might be tough to make a decision. After all, they’re practically the same seat! I think that in this case, the Advocate is the winner. The price difference isn’t that much. I found an Advocate seat and a Boulevard seat that were within $50 of each other. I think that money is well spent on additional safety and a little extra padding. If you’re debating between the two seat, opt for the higher-rated and nicer, albeit pricier Advocate. You’ll absolutely get what you pay for.

Being a mom is no joke! With a little coffee and a whole lot of Jesus, I'm just trying to raise my 3 kiddos (ages 1, 3, and 7) and teach them to be good people. I want to help fellow moms find the best products to help their families thrive! In the tiny shreds of free time I get, I love to hike, sing, bake, and watch Netflix. Or sleep.