The Teenage Mutant Ninja Turtles have been popular on and off for decades- beginning in the mid-1980s. Beginning as a comic, TMNT has television shows, movies, and a wide viewing audience. It is popular among kids of all ages and there are toys for toddlers, teens, and any other fans of the show. Below, you’ll find our list of best ninja turtle toy choices, including action figures, playsets, collectibles, and more. 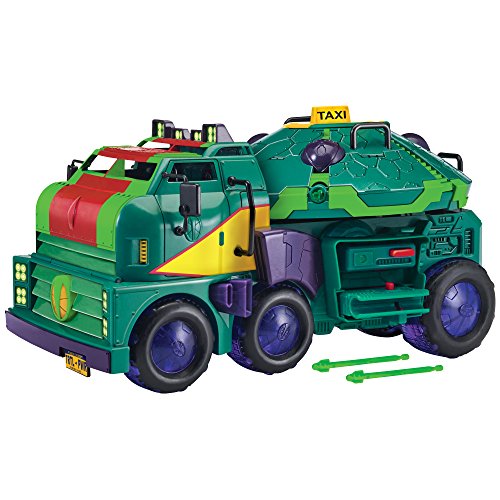 This TMNT playset makes it easy for kids to play pretend. The turtles have working front and rear hatches and Donnie has a lab inside that launches projectiles, raises up, and turns 360-degrees to shoot from all sides. It also has an escape hatch on the bottom and a secret ops panel.

This playset can also be expanded as Donnie’s lab works with the Epic Sewer Lair Playset and the tank is compatible with the Hog cycles that launch projectiles.

Even though there is seating inside the tank, it’s hard to close it with all four turtles inside. However, there is a place to attach one turtle on the outside of the tank. Donnie’s lab also sticks a little, so younger kids may need help putting it back down to avoid breaking it.

The Ninja Turtles Digital Watch with LED Lights has a bright green strap and pictures all four of the turtles on its face. With an adjustable strap and easy-to-read design, this is perfect for toddlers and teens.

The time is displayed in the middle of the watch face in digital numbers. When the top-right button is pressed, a multi-colored light show is displayed on the dial. There is also a green metallic bezel that surrounds the face. While the watchband is comfortable, the rubber material that is used can be a little difficult for kids to buckle on their own.

This TMNT watch comes in a cute tin box that is easy to wrap for gifting. It is durable and will withstand drops. However, you’ll want to be sure your child takes it off before showering because the watch is not waterproof. 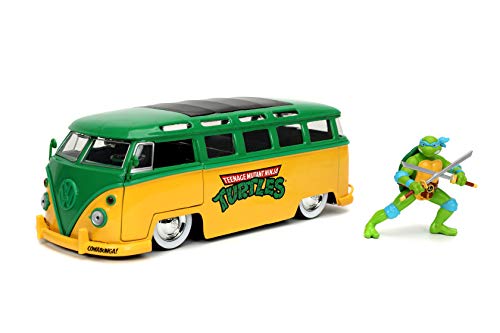 The Teenage Mutant Ninja Turtles Volkswagen BusTeenage Mutant Ninja Turtles Volkswagen Bus from Jada Toys is a 1962 VW bus that is authentically licensed and made of 100% die-cast metal with rubber tires. It includes a 2.75″ Leonardo figurine toy that is also made of die-cast metal, therefore you cannot put Leonardo into the VW bus.

Even though you cannot fit the Leonardo figurine into the VW bus, you can still open doors, a window, and the rear door. The manufacturer recommends this Teenage Mutant Ninja Turtle toy for children ages 8+. 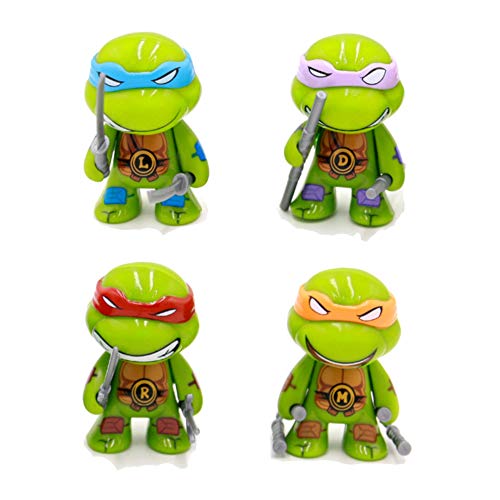 The YongEnShang Teenage Mutant Ninja Turtles Action Figures comes with all four turtles, with each standing a little over 2.5″. These posable figurines come with weapons and can be used for cake decorating, making them a great topper that your child can wash off and play with later.

The size of these turtles is perfect for toddler’s hands. They are made of solid, durable pieces so younger kids can play with them as well. Many delights from playing pretend and fighting crime while others just like carrying the turtles around. 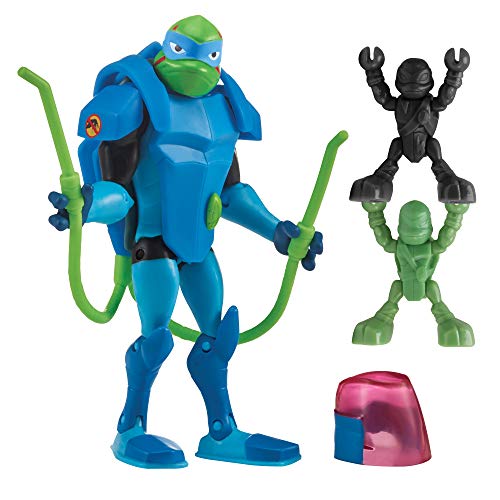 Leonardo comes with several accessories that help kids to enjoy the toy more and build their own adventure. He stands 4.5″ tall and has several posable areas. If Leonardo is not your child’s favorite, you can also choose one of the other four turtles.&nbsp;

The accessories included with Leonardo can be easy to lose, especially if your child leaves their toys out. They’re also a choking hazard so this is recommended for ages four and older. 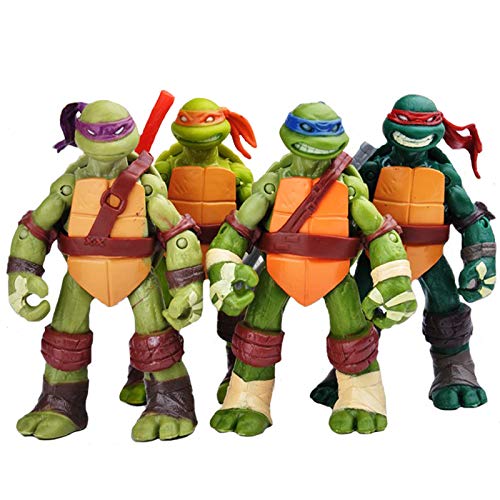 Pick the 4 PCS Set Ninja Turtles Set for action figures ready to play with for intense fun. All four turtles are included in this set as figurines standing about 5″ tall.

For enthusiasts that may want to collect this set, the turtles come in a Sewer Squad sealed box. Each turtle also comes with its signature accessories and a sewer lid base plate that has been personalized with each turtles’ name.

The turtles are also highly posable with 34 points, including details like the toes and thumbs. This makes the turtles great for imaginative play. Something to note is that some of the posable joints are a little flimsy so this isn’t a good toy for younger kids that might be too rough with the parts. 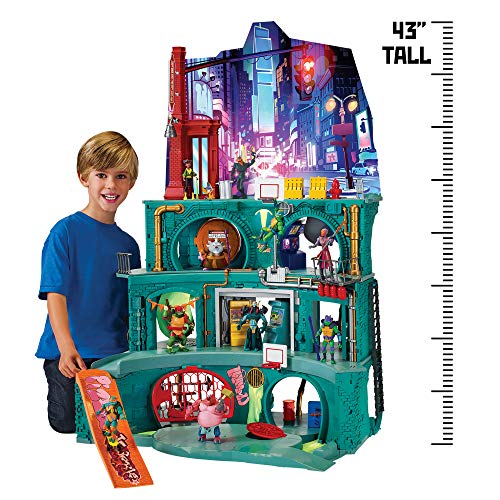 The Rise of the Teenage Mutant Ninja Turtles Epic Lair Playset is an impressive 43″ tall and packed with many features. The structure features four levels, seven rooms to train in, a catapulting basketball hoop, a sewer slide, and more.

Some of the rooms you’ll find include Splinter’s dojo, Donnie’s backpack storage, Leo’s rotating weapon storage rack, Raph’s weight training room, and Mikey’s arcade. Many of the rooms also have front and back entrances, which makes it easy to play with a friend. Even though this is packed with features, it’s important to note that you’ll need to purchase the Ninja Turtles, Splinter, and any other characters your child wants to play with separately.

Your child will love discovering the different features of the structure. Each room has a unique, fun feature and there is an adjustable skateboard ramp outside. This playset does have smaller pieces, so it’s recommended for ages 4 and up.

How We Selected Ninja Turtle Toys

Have you ever asked your child which Ninja Turtle is their favorite? Each Ninja Turtle has his own characteristics and things they are good at. As your child identifies these traits, they have a more realistic play.

More than likely your child already has a favorite Ninja Turtle- all you have to do is ask!

Many kids appreciate TMNT toys for an action-packed playing session. They may make figures run around and fight as they hunt down the bad guys.

Durability is usually a problem with toys designed for younger kids, especially since toddlers do not always know their own strength. If parts break off, they can become choking hazards.

One thing that you can do is to shop within your child’s age range when looking for toys. Manufacturers recommend age ranges based on the safety of parts, especially when manufacturing toys for younger kids.

Overall quality involves factors like how realistic the toys are and if they withstand play by the recommended age range. To assess overall quality, we tested some of these toys out. Real parent reviews were also considered from sources all over the web.

What types of Ninja Turtle toys are available?

Some of the most basic Teenage Mutant Ninja Turtle toys are action figures, vehicles, and accessories. Ninja Turtle playsets are also popular since all the pieces make it easier for kids to engage in imaginative play.

There are also plush toys, tents, and other fun Ninja Turtle toys for toddlers that don’t have smaller parts (so they aren’t a choking hazard).

When did Ninja Turtles become popular?

The Teenage Mutant Ninja Turtles started as a comic book created by two friends; Peter Laird and Kevin Eastman. It was published in May of 1984 with a limited run of 3,000 copies that quickly sold out. They experienced popularity for the first few years. Many TMNT enthusiasts had trouble finding the comics because they sold out so quickly.

A few years later, Playmates Toys agreed to a contract producing Ninja Turtle toys if the comic book became an animated series. Fred Wolf Films produced the first 5-part miniseries. The miniseries was an animated cartoon for younger viewers and the TMNT toy line was started not long after.

The popularity of TMNT continued into the 90s with more comics, movies, television series, and toys. You can read a more detailed history of the Teenage Mutant Ninja Turtles here. Even today, TMNT has won the hearts of young children, teens, and even some adults.

Where can I buy Ninja Turtle toys?

The Ninja Turtle franchise has been popular for decades and is not marketed exclusively to any company. You can find Ninja Turtle toys almost anywhere.

One of the benefits of the widespread interest in turtle toys is that you can find it in large retail stores like Walmart and Target, as well as countless online retailers.

Choosing the best Ninja Turtle toy is easy if you consider your child’s age and what they like. From collectible figurines modeled after the original turtles to turtle toys from the Rise of the Teenage Mutant Ninja Turtles show, there are plenty of options.

Being a parent of younger children, my favorite is the Rise of the Teenage Mutant Ninja Turtles Epic Lair Playset. Both boys can play with it at the same time and it’s big enough that they don’t end up fighting as much as they do when playing with other toys.

Samantha Davis is a part-time writer and a full-time mommy of two boys, Apollo (age 5) and Adrien (age 7). She has been working as a writer for seven years and loves the freedom it gives her to spend time with her boys and fiance.and do things like camping, swimming, and painting. She is also a parent to three fur babies- two dogs and a cat!