Diaper pails are an important accessory in every nursery for easy diaper disposal. While you can just use a trash can, innovative diaper pails help control odor from being released. The Ubbi Steel Diaper Pail has some of the best odor-locking features, and claims to be the best diaper pail available.

What are these features and do they actually work? Read on to find out. 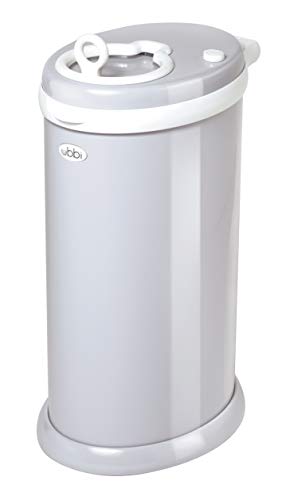 The Ubbi has an array of features to help keep odors in the pail and your room free of smells:

The Ubbi diaper pail has rubber seals around the lid and around the opening through which you put the diapers. These rubber seals ensure an airtight seal, keeping all odors sealed inside the pail.

Obviously, when you open the door to put diapers into the diaper pail, some odors are released. However, Ubbi has tried to minimize this release by having a sliding door on the lid, rather than opening the entire lid of the pail. Because it is a sliding door and not a lift type of door, air disturbance is minimized, limiting the stinky air that is released from the pail.

Plastic diaper pails allow odors to escape through pores, but the steel body of the Ubbi pail does not. It’s surprising how other diaper pails don’t address this issue. In my opinion, this is probably the most important feature! Otherwise, you might as well just use a trash can. We originally had a Diaper Genie for my son, and actually stopped using it because it wasn’t containing the smells.

I can say from experience that plastic does not contain odors well enough. When my son was a newborn, we didn’t have any issues with our plastic diaper pail. However, once he started eating solids and his diapers became stinkier, we realized we needed something better. So while we thought we were saving money by getting a more inexpensive pail, it became almost useless to us once we realized it didn’t contain odors well enough.

Many diaper bins need specific bags in order to function correctly – and they are expensive! I was spending around 15-20 dollars a month on the bag refills for my diaper pail. It made me not want to use the pail because I didn’t want to have to keep buying the refills! I finally started using regular kitchen bags, which were much cheaper. But because my diaper pail isn’t designed to use just any trash bag, it did not work very well.

With this Ubbi diaper pail, you can use any tall kitchen bag, plus you can use cloth liners, such as the GroVia and Planetwise liners if you use cloth diapers for your child.

We’ve got all the best cloth diapers reviewed for you! 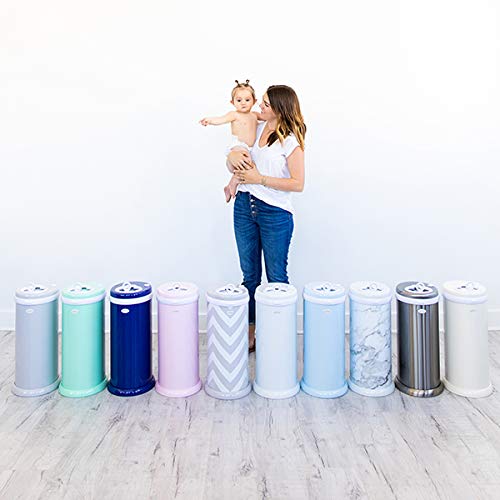 Want a cute way to store your diapers before you use them? Grab a baby diaper caddy.

The Ubbi pail is relatively compact, so it won’t take up too much space in your nursery or kitchen. It holds an average of 35 diapers before it needs to be emptied. I say average because as your child ages and uses bigger diapers, the amount of full diapers that any pail will hold gets smaller. The Ubbi holds up to 50 newborn size diapers, but this number decreases as diaper size increases. I think this number is sufficient – I like to empty the bag on a regular basis anyway just as part of my routine.

This is another one of my favorite features about this diaper pail. My son is SO curious about everything, so he loved opening and closing our diaper pail lid. Every time he did this, a gust of odors would come out, and quickly stink up the room. The Ubbi pail makes it more difficult to open because it has a knob that you have to turn on the top of the lid in order to open the diaper hatch.

My diaper pail eventually started to smell on its own and we would have to air it out outside every now and then. You won’t have that issue with this pail – because it is steel, the odors don’t attach to the pail itself and it is easy to wipe clean when needed.

If you are to have any issues with the Ubbi Steel pail, you won’t have any problem getting them resolved. If anything, this sells a product to me. I like to know that if I have any problems with a product, they will be resolved without too much hassle.

As I already stated, the hatch for the Ubbi pail slides open, but it does not have a “pinching” mechanism that other diaper pails, such as the Arm and Hammer Diaper Pail, have. If you’ve never seen this feature, it kind of gives the pail an extra layer of odor release protection by twisting at the very top, keeping it more sealed. The Ubbi pail does not have this – so you simply open the hatch and drop the diaper in.

It’s hard to have a diaper pail that has zero odor release, because you do have to open it in order to put the diaper in. Although the Ubbi pail doesn’t have the pinching feature that some people like to see, the sliding door will minimize odor release on its own by limiting air disruption. You will have some odor release when opening the hatch, but this is really the case with any given diaper pail.

Many diaper pails have a foot pedal so that you can open the lid hands-free. This is definitely a useful feature when you are juggling a baby in your arms. The Ubbi Diaper Pail does not have this feature. You need to use a hand to turn a knob and then slide the hatch on the top open. The reason for this is to minimize the release of odors, as I mentioned above. It’s give and take, really. I guess part of me would prefer to have it hands free, but boy, when you open the lid of a diaper pail, the smell can linger for a while, so I can see the benefit of preventing this from happening.

The opening on the top of the Ubbi through which you dispose of the diapers has a diameter of just 4 inches. This is relatively small, and is so to minimize the release of odors when opened. You still will be able to get your diapers through, but it would be easier if the opening was bigger. 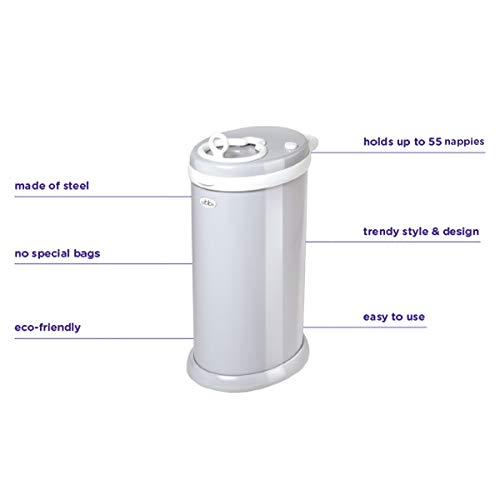 This is a higher end diaper pail. I think it is important to keep in mind, though, that you won’t be spending money on expensive bag refills since you can use any tall kitchen bag. Because of this, the Ubbi pail will probably end up being less expensive than your cheaper alternatives.

I remember getting my diaper pail and then realizing how expensive the refills were. I thought, “oh, that is why the diaper pail is so cheap! They make their money on the bag refills!” Don’t get tricked into this like I did. If it is the price that is making your question this purchase, keep in mind that the Ubbi may actually be a cheaper alternative in the long run.

A good diaper pail is nothing without good diapers to go in it! Click here to read about the baby diaper choices you should consider.

Is this product absolutely necessary? No. But it is very convenient. I thought about not getting a diaper trash can, but once you get into toddler years and the diapers get more smelly, you’re going to want something like this. Otherwise, you’ll find yourself taking each individual diaper out to the trash because it WILL stink up whatever room you throw it away in.

The Ubbi is expensive, but when you consider that you don’t need to buy special refills for it, it really isn’t bad. You’re paying more upfront, but you will end up spending less in the long run. I highly recommend the Ubbi Steel pail because it does what it needs to do better than most other pails out there.

I am a stay at home mother to one son. With a background in safety and health, I am very safety-conscious, especially when it comes to products for my child!