Is this new multitasking soother/swing/rocker combo worth its price tag?

New baby products come out pretty often. Just ask a seasoned mom who has to shop for new gear. So when something new comes out, it really makes you wonder if it’s a great new invention or just a small, trendy tweak on a time-honored thing. In the case of the Graco EveryWay Soother with Removable Rocker Infant Swing, it’s actually something new and cool. Good old Graco has done it again by creating a soother that can calm any fussy baby. It’s got several speeds and motions, with sounds, toys, and vibrations, too. As if that weren’t enough, it’s got a removable baby rocker so that your precious baby is nearly guaranteed to stay asleep no matter what you’ve got to do. Once you put the kinda pricey swing together, you’ll love the peace it provides. 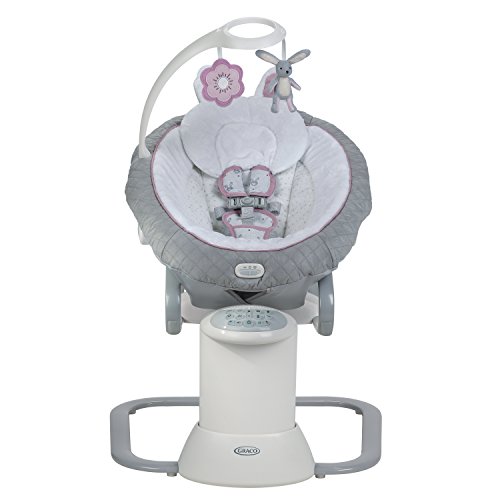 A Swing By Any Other Nameâ€¦

The name says soother, but the product says swing. So what exactly is this thing? Well, it’s a swing, but it’s also a baby rocker. It can work as one or both. Together, it’s a soother for your baby. Let me explain a bit further.

Graco calls this bad boy a â€œmulti-use swing.â€ Well, that’s because it’s primary function is to swing. And by swing, I mean move around. It’s not limited to simple forward and backward swinging like a lot of infant swings. The aptly-named EveryWay Soother has 16 different motions. Since the symbols on the chair controls look like hieroglyphics, they can be confusing. Here’s a breakdown of the basic motions:

You can do each of the 8 motions either front to back or side to side. That equals the 16 overall movements of the swing. But, in order to do the front to back swinging, you have to adjust the seat to face sideways on one side or the other. This is an ingenious design on Graco’s part, but it does equal more work on the parent side of things.  As if all of that weren’t enough, you can adjust the speed of the swing. It’s got six settings that range from â€œI barely want to move my tiny newbornâ€ to â€œI think this thing is going to launch my laughing 5 month old across the room.â€ Let your parent instinct be your guide. This is where I’m going to talk more about the chair itself. It can be a separate entity from the swing and is a baby rocker in it’s own right. It’s a plush little seat with a newborn pillow insert for baby’s head. Both the soft seat cover and the adorable infant insert can be thrown in the wash after a messy swinging or rocking session. It can recline to 3 different heights to accommodate babies at various ages and stages.

The five point safety harness is padded on the shoulder and at the bottom buckle to ensure that baby is comfy and pinch free. And you’ll be thankful for that buckle when your older, squiggling baby wants to be rocked or swung at maximum speed! The rocker is called such because it has two curved legs on it that can be used to gently rock baby. This part has to be done manually by the parent. The icing on this lovely rocker cake is the two speed vibration, which has never failed to calm my colicky little girl.

When you let their powers combine, this seat is awesome. I have found that the best way to use the seat is to pick a home base for it. That could be the nursery, the kitchen, the living room, wherever you think you’ll use it most. You park the swing base in this area. The nice thing is, you don’t need a lot of space for this swing, because it doesn’t need a lot of area to accomplish its movements. Then if you need to do something else, like go take a shower while the baby is sleeping, you can click out the rocker by pushing in the release handle and lift it up and off to wherever you need to go. You don’t have to leave baby in another room unattended when they’re asleep because you’re afraid you’ll wake them up if you try and move them. I love this feature. The rocker itself is comfortable so baby stays asleep, but then the swing is nice for when baby is awake and wants to move, or is fussy and wants to be calmed.

This baby soother has a lot of things to help keep your baby happy. The most obvious thing is the ability to swing and move, which is notorious for calming down even the fussiest of babies. But in addition to that, it has other things that your baby is going to love.

For the Little Ones

One of those things is the songs and music it makes. It’s got 15 songs and sounds to soothe baby on an auditory level. The nature sounds are especially nice for the small babies because they’re a bit more on the quiet side. Speaking of quiet, you can adjust the volume of the music so that delicate ears get just the right amount of sounds or music depending on their level of alertness.

The other baby friendly feature is the mobile that hangs overhead. It is adjustable, which I really like. You can swing it forward and out so that you can get baby in and out of the seat easily and you won’t bump their head. I also like this mobile because it’s attached to the seat itself, so if you’re using just the rocker mode, you can still have the mobile.

The biggest thing that’s not so good about the mobile are the toys themselves. It’s got two little toys that are plush and hang down. They are nothing fun to look at, and they don’t even have any bright patterns, colors, or contrast that a baby would like to stare at. My baby took one glance at them and decided to look elsewhere around the room. For something from Graco, I wish they would have taken just a little more time on the toys, and made something a little more developmentally engaging for the baby to look at, as opposed to something that’s just cute. 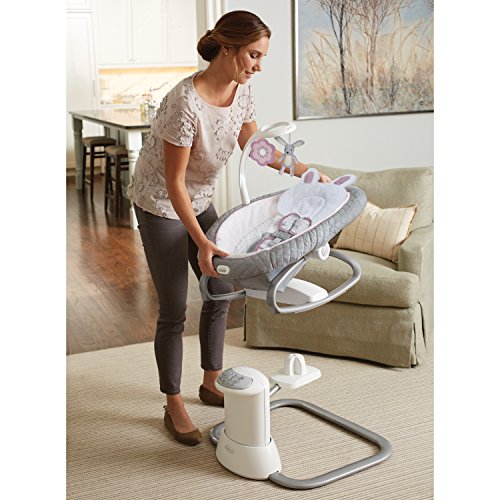 I’ve yet to meet a Graco product that isn’t parent-friendly. All of their products seem to be easy to assemble and even easier to use from a parent standpoint. This innovative product is no different. First of all, putting it together is really simple. You just have to click a few bars into the base and click a few more bars together to make the seat on the swing. I will say that a couple of the bars did not want to go into their homes, so I had to get a little creative with how I did that. I basically just muscled them into place using sheer willpower and the desire to not have a fussing baby. But altogether, it only took me about 15 or 20 minutes with the help of my very tool savvy preschooler. Once it was together, it was super sturdy and I have no doubt that it will hold up.

Another feature that I like from a parent’s point of view is the optional AC adapter. You can totally use batteries in this thing, which is what most of us will end up doing. And like all the other Graco products that I’ve owned, the battery life is astoundingly great in this Soother. One set of batteries seem to last a good month, and that was with a lot of use on a daily level. But, if you want to save on batteries, which we all know are ridiculously expensive, you can use the AC adapter. As long as wherever you keep the swing base is in an area close to an outlet, I would say that’s the way to go. Just remember, if you want to use the vibration setting on the seat itself, you will still need batteries for that part. 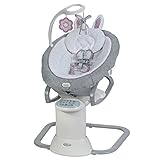 Because it is a new product, there aren’t many reviews out there, but they don’t look too bad so far.

In summary, I would say that the Graco EveryWay Soother with Removable Rocker Infant Swing is a wonderful baby product. It’s got enough movement options to keep any baby happy. The plush chair is big and cozy and can be used as it’s own little baby rocker. It’s got lovely music and a cute, albeit boring, mobile. The sounds, vibrations, and movements take up a lot of batteries though, and this sturdy product did take some doing to put together. The price tag isn’t small for all of these features. I think that this Soother is worth every penny. There wasn’t a feature that I didn’t like or use, and I have zero major complaints. That’s pretty rare for me with a baby product! Overall, if you are considering a swing for your baby, get this Graco EveryWay Soother. It will be a well-used and well-loved product in your home.

Michelle is the mom of a brand new baby, a sweet and sassy toddler, and a funny first grader. She is a writer, editor, researcher, and Christ follower. She loves helping fellow moms find the best products to help their families thrive! When she has some free time, she likes hiking the local mountain trails, singing and playing the piano, baking up new treats, and reading the classics.