In today’s modern world, we’re aware of chemicals that have been used throughout numerous decades before us that are today seen as unsafe, and we’re purchasing more and more organic’, free from’, and natural’ products than ever before. Yes, even when buying diapers. In the past, diapers were purchased simply to do a duty’.  Today they’re purchased to do that duty safely and every chemical that is or is not used is accountable.

If you are in the market for a diaper to wrap around your little one that is free from so many of the frightening chemicals we want to avoid, one of the most recognizable brand names in eco-friendly’ and green’ diapers is Earth’s Best. 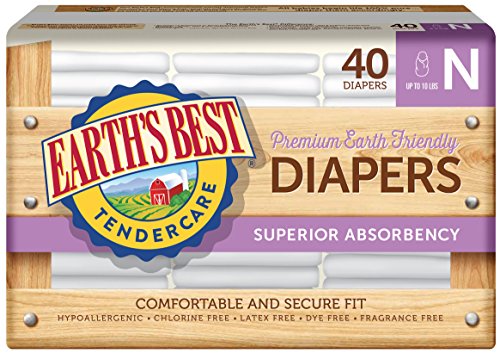 It’s incredible just how frightening the world suddenly becomes when we venture into parenthood. (Or maybe that was just my’ experience. I’ve often been told that I make worry an art-form.) Prior to having a baby of my own, I would have walked past the baby aisle at the store or watched a commercial on TV for diapers or wipes or toys without thinking much of it. I knew the brand names of Huggies and Pampers and Fisher Price and Mattel and I knew the jobs they were all intended to do.  Deeper thought hardly seemed necessary. Diapers and toys were just diapers and toys.

Then I became a mom. Now, no matter the product and no matter the brand, there isn’t a question I don’t ask and a chemical I don’t research. The Internet and its endlessly available information has become both my best friend and my most avid enemy.  At times I’ve wanted to raise my son in a cave, far away from the seemingly overwhelming environmental factors that feel as though they are a danger to him at every turn.  Of course, I’m sure there would be some sort of a hazardous inhalant in that cave, too.  The environmental factors that keep me up at night with worry have been in existence for years; the difference today is that we know about them.  Having a ‘green’ product as an option for my baby is a huge value to me.

Let’s look at a few of the basic product benefits of Earth’s Best diapers as stated by the company:

The first question that I wanted answered when I began researching diapers was why chlorine would be found in any of them. As it turns out, the absorbent core of a disposable diaper is apparently often bleached’ with chlorine in order to appear white. Chlorine can produce dioxins, which are carcinogenic, so it’s easy to understand why we would not want to wrap it around our babies, and why chlorine-free’ is a product feature that many of us value.

It should be noted here that upon quick research, both Pampers and Huggies state clearly on their websites that they also do not use chlorine.  Whether chlorine-free’ is a true differentiator between Earth’s Best and other brands is not certain, but it, either way, remains a valued feature.

Next, let’s look at why the features of latex free, dye free, and perfume free’ are also important to so many of us.

Anyone who has ever faced a latex allergy is already aware of how dangerous it can be.  Latex allergies are of course rare, but the parents among us who are living with the allergy are in need of a safe option for diaper changes.  Those same parents may also understandably be wary and cautious of not wanting to take the risk with a newborn baby who, however low of a chance, may share the same allergy.

It should be noted again that upon the same quick research as referenced above, both Pampers and Huggies also state on their websites that they do not make their diapers with natural rubber latex. Once again, whether this is a differentiator between Earth’s Best and other brands remains uncertain. Earth’s Best does differentiate itself with its feature of dye free’. The frequent Disney, Sesame Street, and other character drawings found on so many diaper brands will not be found on this one.  Earth’s Best diapers are plain white, picture-free. The company is clear in its design that the diapers are for functionality without the concern for aesthetics.

Why would this feature be valued? The list of chemical dyes that have been found by the EPA to be dangerous is a mile long.  Though Pampers and Huggies both state clearly on their websites that all ink or pigment used in their diapers has been thoroughly tested for safety, and though we want to trust that Federal Government regulation on baby products will indeed have prevented the use of any dangerous chemical for the sake of a picture of Mickey Mouse on a baby’s bottom, there will be parents who prefer to avoid the route of dyes altogether.  Earth’s Best is a stand-out choice in this regard.

Perfume-free’ is a common feature seen in baby products today, and it is another feature that does not differentiate Earth’s Best from competitors. Pampers and Huggies, for instance, both offer perfume-free diapers (while also offering scented).  The primary concern with perfumed baby products is the presence of phthalates. Phthalates have been found to cause cancer at high exposure levels in laboratory testing of animals, though the FDA has not yet linked a direct impact on human health from phthalates. Indeed we encounter them in a variety of ways every day, but many parents again will prefer to avoid any recognized chemical if given the opportunity to do so.

Earth’s Best has also stated the features of a moisture barrier cuff for leak protection, a large variety of sizes, breathable sides for a comfortable fit, and having been made with renewable resources. These features are again not differentiating, but rather seen across the majority of diaper brands today by manufacturers who know these are features that parents need to see. The fact that the majority of brands claim as such, of course, does not necessarily mean that all brands deliver on the claim.   Earth’s Best, however, seems to.

The most prevalent piece of feedback on Earth’s Best diapers is without a doubt that of fewer leaks. There will always be exceptions (I, for one, am not sure there is any diaper in existence that could prevent my son’s occasional blowouts.), but moms and dads are overall exceptionally happy with the absorbency of Earth’s Best diapers. As a result of less wetness, there is also a great deal of satisfaction from parents who are seeing less diaper rash on their little ones.

Were these selected as the best diapers to use for our Best Diaper list? Find out!

The seven sizes on offer are another plus, though some of the larger sizes have been noted to be a little stiff and perhaps not as soft and moveable as some of the competitor brands. Nonetheless, if a baby who was previously uncomfortable from a painful diaper rash is now free from it, it may be a fair trade for a slightly stiff around-the-edges diaper to maintain that comfort.

Cost Comparison: On the pricey end

Earth’s Best diapers, if not bought in bulk, can run a little pricey in comparison to other brands. A 35-count box is often over $20, depending on where it’s found.  I can get nearly the same amount in a Huggies pack for $9.00.  With that said, the operative words above are depending on where it’s found’.  A few minutes of price comparison shopping online can help to find a better deal. The downside will be in those moments of realizing you are low on diapers and need to run to a store to pick up a pack immediately; the lower prices may not be an option for you in that instance.

Of course, running to the store and finding Earth’s Best may not be an option at all.  Another item of feedback from many parents on Earth’s Best diapers is that they can be difficult to find. I have yet to see them in my local Harris Teeter, Wegmans, or Giant, but I know they are carried a little further down the road if I drive to Super Target. And again, I can always order ahead online and wait for delivery at home if I’m not in a rush.

Overall, Earth’s Best features of chlorine-free, perfume-free, and latex-free are not solely attributable to Earth’s Best in a way that differentiates the brand from any other.  The dye-free feature, however, is a stand-out. And Earth’s Best diapers seem to be widely recognized by parents as keeping babies dry with fewer leaks and less diaper rash. The materials that the diapers are constructed from are organic and derived from such products as corn and wheat. The beneficial impact to the environment as well as the safety factor for babies will be of value to many parents and will be another stand-out from the group. If the higher cost and potential extra time needed to locate them is not of a concern and/or are outweighed by the material base and leak prevention found in Earth’s Best, than these may be the diapers for you.

Danica is a theater director and teacher, and a proud mommy to a precious baby boy who amazes her every day.