When I was pregnant with my first child, I spent hours researching and agonizing over my car seat decision. I wanted the best for my baby, but the price stickers on premium models made me hyperventilate. At the same time, I didn’t want my desire for savings to compromise my child’s safety.

A few years and more car seats than I’d like to admit later, I’ve learned a few things about car seat shopping. One is that by and large, the car seats on the market will keep your child safe. You can get a safe car seat without taking out a second mortgage. At the same time, it’s often worth investing in premium features that make the seat easier to use and install and that give you peace of mind.

That’s the appeal of the new Essentials line from Britax. The Essentials by Britax line is Britax’s new value line, offering the premium safety features of the Britax brand at a more affordable price. Essentials by Britax has two convertible car seats, the Allegiance and the Emblem. The two seats are very similar; the main difference between them are the two layers of side-impact protection available on the Emblem. The Essentials by Britax Emblem Convertible car seat is a good car seat, but there’s not a significant difference between it and the slightly lower priced Allegiance. At the Emblem’s price point, I think parents shopping for a car seat in this price range should also paying a little more for the additional features available on seats like the Britax Marathon G4.1 Convertible Car Seat. 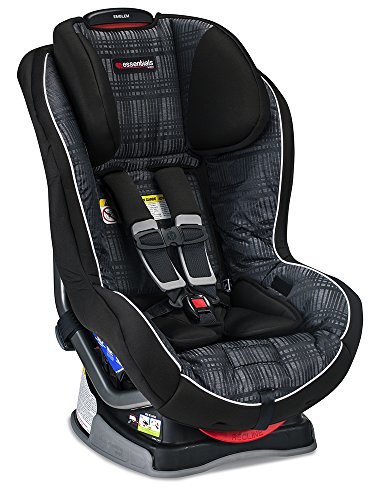 Like the Essentials Allegiance, the Essentials by Britax Emblem is a convertible car seat that can be used for children weighing between 5 and 65 pounds. It can be used in rear-facing or front-facing mode and installed with either LATCH connectors or the vehicle seat belt. The Emblem also has three recline positions to help you correctly position the seat in your vehicle. It features many of the same safety and parental use features as the Allegiance, but does offer an additional layer of side-impact protection over the Allegiance. 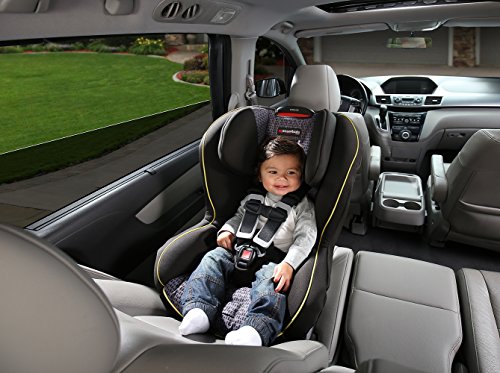 The Essentials by Britax brand  describes themselves as a value brand built upon the primary focus that every family deserves the peace of mind that comes with 50 years of Britax safety heritage. Since that is the goal, it’s not surprising to find that the Emblem features many of the same safety features available on Britax brand car seats.

The Essentials by Britax car seats feature what they call SafeCell Safety Protection, a set of features designed to create a cell of safety around your child. These features include: 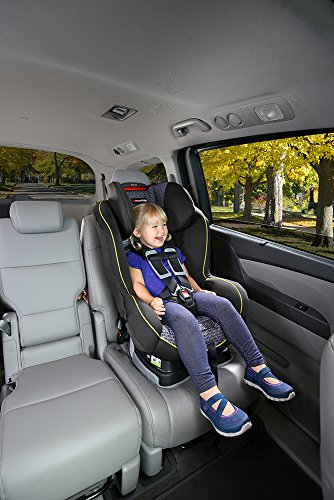 The Emblem offers many of the same ease-of-use and parent-focused features available on higher-priced Britax models. The seat has many features that appeal to me, such as the easy to use LATCH clips and the click-tight system that helps ensure a proper fit when using the seat belt installation. I also like the number of harness positions, the easy to remove cover, the simple to adjust harness, and the two position buckle.

Here’s an overview of the Ensemble’s parent-focused features.

One of the most challenging things about car seats is having to unthread and rethread the seat every time you need to adjust the seat for your growing child. You have to take the whole seat apart to do it, and what happens if you put it back together wrong or lose a piece? That won’t be a problem with the Allegiance. This seat features a 10-position harness adjuster headrest that allows you to adjust the harness without rethreading. That’s a huge plus factorI’ve taken apart and reassembled car seats way too many times.

I have a love-hate relationship with LATCH connectors. I love that they (theoretically) make it easy to install and remove your car seat without hassling with getting the seatbelt just right. However, I’ve also done battle with more than one set of LATCH connectors I found nearly impossible to remove without assistance. Thankfully, the Allegiance features Britax’s easy on and off LATCH connectors. Simply click the lower anchors into place, then release them with a push of a button. You can see how the Britax LATCH system works in the video below.

Most newer cars should have LATCH connectors available, but sometimes parents may prefer to use seat belt installationor need to because or their vehicle’s weight limits. One of the challenges of installing your car seat with the vehicle seat belt is getting the belt tight enough to hold the seat securely. The Emblem comes with a lock-tight belt system that should make this task much easier.

The Emblem has an easy to remove seat cover that can be removed and replaced without rethreading the harnessno worries about putting the seat back together or losing harness clips in the process. That’s a huge plus, but it’s negated somewhat in my view by the spot-clean only cover. That’s standard on all Britax seats, but I’ve had enough messes in the car that I want to be able to throw that cover into the washing machine and call it good. I never feel that I’m getting a spot-clean only cover thoroughly clean. That said, if you’re a Britax fan this may not be a huge issue for you. You can read more about instructions for cleaning Britax car seats at this link.

The Emblem looks comfortable, but the design doesn’t immediately appeal to me as much as the Allegiance. I’m also not overly fond of the five fabric design options. They all seem a little busy and are more neutralI tend to prefer bright colors on baby products. The Emblem also doesn’t have a cupholder included, though you can purchase a clip on cupholder accessory from Britax. That’s another small negative for me. I prefer cupholders that are built into the seatclip on types seem flimsy and get lost too easily.

Overall, the Emblem is a well-designed seat that will keep your child safe. However, I do have a few minor concerns.

The spot-clean only cover is an issue for me. Car seats get messy. I like being able to toss my seat cover in the washer, especially in an infant seat with the potential of blow-outs and upset tummies. Again, if you’re sold on the Britax brand this may not be an issue for you, but it’s a negative feature for me. I also wish the seat came with an included cup holder. It’s minor, but I dislike the clip on variety.

The size of the Emblem is a more significant concern. Britax makes large car seats. That’s not an issue if you’ve got plenty of room in your backseat, but if you’re driving a compact car or putting the seat behind a tall driver you may want to try before you buy. Also, at 19.6 pounds, you’re most likely going to want to put it in your car and leave it there. You may need a lighter seat for travel or if you’ll be moving the seat between vehicles frequently.

The Emblem is a well-designed car seat that gives parents the security of the Britax name at a more affordable price. However, at this price point, I want to love my car seat. While washability is a minor concern, it’s enough that I’d look at options from other brands if I was going to spend this much on a new car seat. See Experienced Mommy’s full coverage of convertible car seats. Also, the Emblem’s price point only leaves a forty to fifty dollar difference between it and seats like the Britax Marathon.

Leigh Powers is an author, speaker, and mother of three from Houston, Texas. You can usually find her with either a book or knitting needles in her hand--and sometimes both.